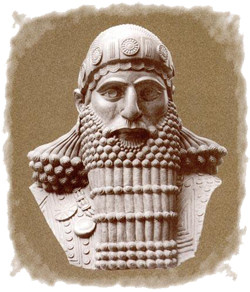 It takes its name from the Code of Hammurabi, the first code of Laws in History which came from Iraq.

Based in Baghdad with branches throughout Iraq it is non-profit, non-sectarian and non-political. Human rights and humanitarian relief organization.

The Hammurabi Human Rights Organization is governed by a Board of Directors made up of prominent members of the community and is supported by donations from the general public and other interested parties.

Its main work consists of researching, finding and assisting with the promotion of Human Rights in Iraq and in direct assistance to those who have suffered as a result of some Human Rights violation.

After the democratic change in Iraq early summer 2003, the idea of establishing the organization evolved in the governorate of Nineveh under the name Hammurabi by Mr. William Warda and Ms. Pascale Warda, afterwards, a number of Human Rights activists joined them, part of them became the core for the founding committee of HHRO.

In June 2003, those activists got involved in meetings and discussions about the need to establish civil society organizations in order to defend rights and basic human freedoms, especially after the increase in cases of human rights violations exploiting the lack of authority and the deteriorating security conditions due to the political change and its reflection on the status of human rights especially the rights of the smaller components, the religious and cultural minorities and others. In light of those meetings and discussion, the first operating body was formed in the historical province of Nineveh, beginning from the town of Baghdida (Qaraqosh) in October 2003, working in coordination with activists in Baghdad and other Iraqi governorates until it was possible to officially register the organization in Baghdad where the main headquarter of HHRO was located, that’s after the stabilization of the administrative institutions and the adoption of laws that would regulate the work of such organizations. The founders of HHRO continued working in this direction until it was possible to hold the constitutive meetings in Baghdad on the 1st of April 2005, and then succeeding in registering the organization as an NGO in Iraq to hold the registration number (IH71134) at the NGO’s office linked to the general secretariat of the Iraqi cabinet … 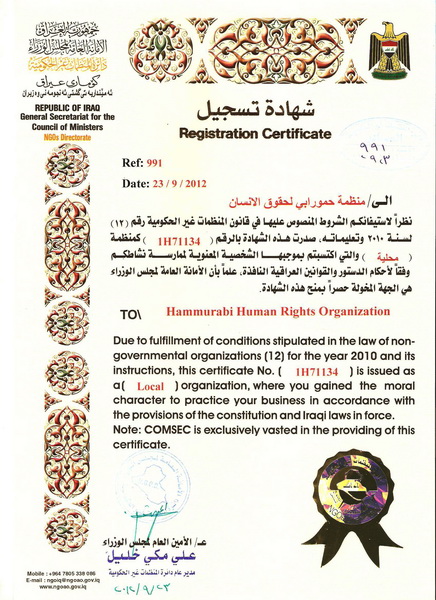 HHRO has two type of activities:

2. Iraqi Legal Affair – The Hammurabi Human Rights Organization was and continues to be involved directly in the Iraqi Judicial system assisting in updating laws on the Federal and Supreme Court level in collaboration with Iraqi and international organizations including the Amman Center for Human Rights and the United Nations Assistance Mission for Iraq.

4. Iraqi Christians – The Hammurabi Human Rights Organization prepared the first exhaustive report on the violation of the Human Rights of one of Iraq’s most vulnerable groups the Christians and continues to update the report and monitor the community.

7. Communication – The Hammurabi Human Rights Organization issues regular reports concerning the Human Rights situation in Iraq including condemnation of violence against Iraqis by armed and outlaw groups, the escalation of sectarian and religious violence and other Human Rights violations.

8. Elections The Hammurabi Human Rights Organization in conjunction with the Sun Network and other organizations regularly monitors Iraqi Elections to make sure they are, free and open.