Conclusion of the third training workshop with a series of adopted distinguished activities. 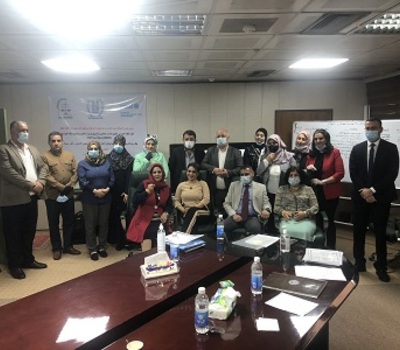 The third training workshop concluded its work on the mechanisms of the advocacy and capacity building project to support the Iraqi government to achieve its obligations regarding the Convention on the Rights of the Child. The workshop marked series of positive developments, the first of which is to keep the participants fully commitment to the program and the knowledge communication between them as well as with the experts at the workshop.

The workshop was also characterized by the rise in the number of lectures to 18, as well as many briefings and interventions. Another feature of the workshop was the conducting of four practical exercises on the national plan in the areas of the rights of displaced children of displaced persons, the rights of minority children, child labor and their psychological and social risks, as well as an exercise on street children, whose proliferation in the streets is a violation of children's rights Iraqi children should have security and service care in health, education and decent living.

Other features of the workshop include the participation of Mr. Mohamed Mahdi Al-Shaikhli an official at UNICEF in two lectures dealt on the mission of on UNICEF and the adopted mechanism of cooperation and partnership and ways of developing these mechanisms, expressing the hope that training of government officials will be a clear entry point for cooperation, partnership and transparency in the preparation of the workshop Government reports, and the extent of the commitment to the Convention on the Rights of the Child, and the importance of involving children in discussions to know their views on the rights activities they aspire to.

The workshop was documented by a number of news reports and video tapes, and was concluded by distributing certificates of appreciation to the participants  by Mrs. Pascale Warda, Mr. Mohammed Mahdi Al-Sheikhly and Dr. Mohammad Turki Al-Obaidi.

For his part, Mr. William Warda the project manager managed the three workshops, expressed his thanks and appreciation to all participants in the workshop success, in advance his sincere gratitude to His Excellency the Minister of Justice Judge( Salar Abdul Sattar Mohammed).

And Dr. Mohammad Turki Al-Obaidi, Director of the Human Rights Department at the Ministry of Justice, and the staff of this department for their continuous commitment to providing logistical services, and expressed his sincere thanks and appreciation to Mr. Mohammad Mahdi Al-Sheikhly for the additional knowledge, information and facts on the ground to the participants during his lecture delivered to them.

Mr. William Warda thanked all the other unidentified people participated in the services and activities leading to the success of the three workshops.

For his part, the participants expressed their sincere admiration and appreciation for the successful management of Mr. William Warda enjoyed and the good measure adopted in organizing the mechanisms of workshops and time management and adopting the necessary clarifications for all the inquiries raised.