Mr. Louis Marqos Ayoub and Mr. William Warda participate in a workshop aiming to develop a strategy for an advocacy campaign to reform the school curricula which reflect the nature of the diversity of Iraqi society. 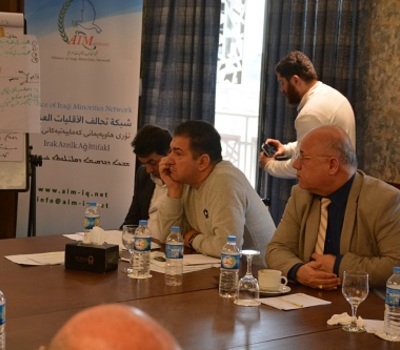 Mr. Louis Marqos Ayoub, Vice President of Hammurabi Human Rights Organization and Mr. William Warda, Public Relations Officer of the Organization, participated in the workshop held by the Alliance of Iraqi Minorities Network (AIM) in Erbil on 7/2/2020 for two days with the support of the U.S. Institute of Peace in order to develop a strategy for an advocacy campaign aimed to achieve a fundamental reform of the school curricula for the elementary, intermediate and secondary stages in a manner that ensures the promotion of diversity values and the preservation of e heritage and rights of all Iraqi identities.

The workshop was attended by 25 activists and experts of Iraqi minorities in addition to experts and officials in the Directorates of curricula of the ministries of education in the Federal Government and Kurdistan Regional Government.

The workshop came after diagnoses that dealt with books and literature taught by students in these stages, as it still includes many titles that contradict civil values and also contradictory rights of diversity.

In his speech Mr. Louis Marqos Ayoub pointed out that there are many knowledge bumps in the current curricula, stressing the necessity of drawing a new strategy for the curricula, in accordance with the provisions of the Universal Declaration of Human Rights and the provisions of Iraqi Constitution, which guarantee equal rights for all Iraqis.

While Mr. William in his speech said that “the required change should not be limited to religious books and social literature, but also a careful survey of all school curricula for these stages and their pruning, also it is important to pay attention to the sentences and expressions that try to undermine community peace and civil values instead of bringing sentences that are intended to give concepts of violence, power and domination, the written sentences should urge cooperation, solidarity, civil peace protection and the promotion of the principles of forgiveness and tolerance”.