On the occasion of the 17th anniversary of its founding, Hammurabi Human Rights Organization is implementing a relief project for financially unable families under the slogan "Seyam Mubarak ". 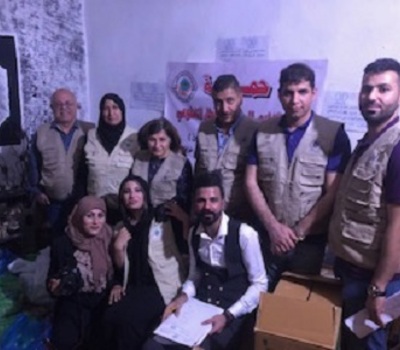 Hammurabi Human Rights Organization implemented a project of relief including tens of financially unable families in Baghdad. The project came under the slogan (Seyam Mubarak), coinciding with the 17th anniversary of its founding, as well as the beginning of Ramadan, and the preparations of Christians to celebrate the Easter holiday. The project involves in distributing 130 food rations including (rice, lentils, chickpeas, salt, pasta, noodles, beans, sugar, tea and tomato paste and egg pack).

Hammurabi adopted a field mechanism, whereby a relief team headed to the district of Orfeli neighborhood of Sadr City on Saturday, 8 April 2022, carrying 55 rations and distributing to unable families in cooperation and coordination with the (White Hands team), which contributed in selecting and participating in the distributing process, where the Organization team included Mrs. Pascale Warda, Chairwoman of Hammurabi Oragnization,media advisor, Mr. Adel Saad, and three members of the board of directors: William Warda, Dr. Mohammed Kathem Al-Ma’eni, Dr. Saif Adnan, and the director of the organization’s administration, engineer Mohamed Essam and Mr. Emad Abed, while Mrs. Ahlam Abadi Muhsen head of the White Hands team,participated in the distributing process with her three daughters, as she took over the responsibility of preparing the place of distribution and bringing representatives of the families to receive the rations. The distribution process was documented by Hammurabi and a voluntary media team that included the photographer Nada Al-Hashemi and the journalist Aziz Al-Essawi.  On the sidelines of distribution, Mrs. Pascale Warda with some women reassured on their conditions, while Mrs. Ahlam said in a statement to the delegate of the Nergal News Network that she was gracious of Hammurabi organization to be among us in Orfeli area to support unable families.

On another part of this field relief program, on Monday morning, April 11, 2022, rations were distributed, in two districts in Baghdad. The first was within Baladiyat neighborhood in Al-Kawthar Kindergarten.

The relief activist Raad Azzo and Mrs. Amira Nour Salman participated in the distribution, and the second location was the church of Mar Yousif in Karrada where number of food rations distributed in the two areas reached 50. The Hammurabi Organization team consisted of Mrs. Pascale Warda and members of the board of directors, Mr. William Warda and Dr. Saif Adnan, as well as engineer Mohamed Essam, Emad Abed and Haitham Majed, the team visited number of families, briefing the extent of destitution and misery and the painful housing space in which they live. The team carried bags of food rations to these families.