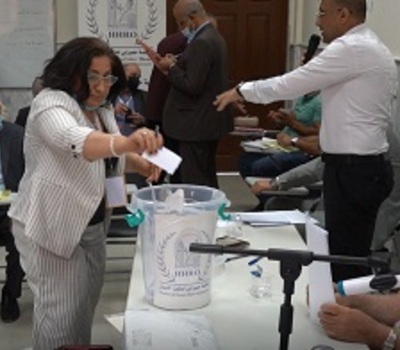 Hammurabi Human Rights Organization strengthened its organizational and administrative democratic path by holding the sixth periodic electoral conference in Baghdida in the Nineveh Plain on Friday, May 28, 2021.

The conference came after numerous delays as a result of the exceptional circumstances imposed by the Coronavirus pandemic.

All procedural mechanisms required by the conference were implemented, as it was confirmed that the quorum has been reached to dissolve the board of directors and a vote was taken to choose a presidency of the conference, to manage the work, which included an extended speech by Mrs. Pascale Warda, talking about what was achieved during the period between the previous electoral conference, held in April 2017, and the current conference. In her speech, Mrs. Warda addressed the expansion in the field of human rights, relief, advocacy and raising the capabilities that the organization has been doing and the size of the challenges faced in security and political conditions and the spread of the Coronavirus pandemic, which was characterized by more tension and instability, and what led to the popular demonstrations and sit-ins that Iraq witnessed since October 2019 , demands announced in the fair call to confront corruption and stop deterioration that struck development on the basis of ensuring justice in employment, reforming administrative affairs, and working in a patriotic spirit that fulfills the rights of all Iraqi components, focusing on the vulnerable and marginalized group.

Mrs. Warda also addressed the entitlement of the stage and the achievements of Hammurabi Organization in human rights and relief, characterized by a great deal of attention on the ground for the most affected segments of society, primarily Iraqi minorities, women, children and youth.

Mrs. Warda called on the participants to have an organizational and administrative vision with all achievements of the organization , received letters of thanks, gratitude and honor, and called for more work that preserves the unity of Hammurabi's goal and renews its field vitality.

The participants in the conference gave  widely time to present and discuss the submitted reports, namely: Relief, raising awareness, capacity building and advocacy projects, completed and under implementation activities of human rights. The following reports were presented and discussed:

Achievement of the programs and projects report.

Achievement report of the Erbil branch of the organization.

Discussions during the conference were characterized by objectivity and vigorous follow-up to the smallest details. Number of conference members expressed the importance of developing the organizational and administrative structure in the light of these achievements. They also called for setting up policies for human rights, awareness, and relief that are more specialized and broad, democratic and geographical, in a way that enhances the prosperity of citizen's rights in development, justice and civil peace and confronting extremism with more civil and democratic values.

After the end of reports discussions and interventions , the conference presidency moved to the electoral democratic step to elect a new board of directors for the organization, where nine general body members meeting conditions were submitted for nomination to choose seven board members, including five actual and two reserved members.

The electoral process took place in accordance with democratic legal controls under the supervision of the Judge Aref Mousa, thankfully appointed by the Presidency of the Nineveh Federal Court of Appeal, and the counting of votes resulted in the winning of:

Pascale Warda, Chairwoman, and in charge of woman and child committee.

Mr. Louis Marqous Ayoub is in charge of Relief Projects and Programs committee

Mr. William Kh.Warda in charge of Public Relations and Media and Finance Committee.

Dr. Mohammed Kadhim Abbas in charge of Studies and Researches and the Legal Committee.

A meeting was also set for organization’s work strategy for the next phase in line with the renewed vitality that characterized the proceedings of the conference, and the hopes raised especially within the framework of the decisions, recommendations and proposals emerged by the conference  to achieve the organization’s goals and future plans, to serves human rights and marginalized groups, that safeguards democratic mechanisms, flow of administrative work, simplification of procedures and transparency.