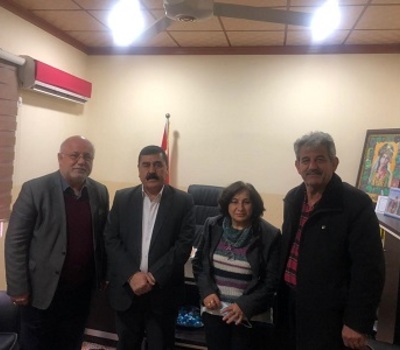 A delegation from Hammurabi Human Rights Organization headed on 15/12/2020 to the district of Sinjar for an exploratory mission to find out its needs and the possibility of implementing projects there.

The field visit included a free tour around the center of Sinjar district, meeting many returned families and getting acquainted with their concerns and needs, as well as visiting the Mayor of Sinjar, where a discussion took place between them about the latest developments and problems facing the district,

Mrs. Pascale Warda confirmed the importance of full priority to the demands of the returnees, away from favoring conflicts of interest, to ensure the protection of rights without discrimination, being the required basis for the application of human rights standards.

The delegation also raised the project that the organization intends to implement including the safe transfer of displaced families to the city and the towns of the district, securing small projects to move life and livelihoods in the stricken city, the project also include programs and plans to develop the health, education and life aspect in the city.

The mayor thanked and appreciated Hammurabi Human Rights Organization for this valuable initiative, noting the importance of the project to implement, which covers many aspects aimed at strengthening the principles of return, life and development.

The delegation members, Mrs. Pascale Warda, Mr. Louis Marqos Ayoub, and Mr. William Warda expressed thanks and gratitude to the National Security Agency, for the provided facilities to accompany the delegation and secure its mission in all steps during visiting and returning from Sinjar.