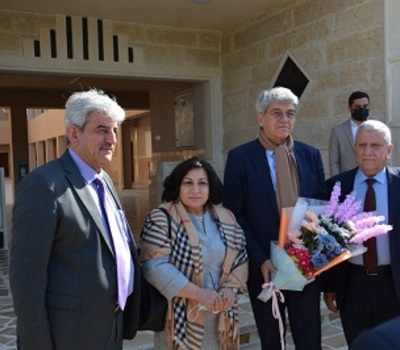 The French Ambassador to Iraq Mr. Bruno Aubert accompaned by Archbishop Mar Youhanna Boutros Moshe, Archbishop of the Syriac Catholics in Mosul and its affiliates, visited Qaraqosh School for Boys in Hamdaniya district within Nineveh Plain on 15-02-2021 Monday morning.The visit came within continues visits to Mosul and Nineveh Plain, including the University of Mosul and the Monastery of Mar Behnam in Nimrud and others.

The visit headed by a delegation of diplomats from the French Embassy in Iraq, at the forefront of the recipients was a government delegation including Professor Issam Behnam Daaboul, Mayor of Hamdaniya District, Brigadier Fares Abdel Ahad, Advisor to the Governor of Nineveh, Mr. Baraa Ezzedine Administrative Assistant of Nineveh Education, Mr. Rafid Youssef, Director of the Hamdaniya Education Department, Mr. Thaer Louis, Director of Qaraqosh school, and number teachers and judiciary personalities.

On behalf of Hammurabi Human Rights Organization the Ambassador was greeted with flower bouquet presented by one of the school's student.

The French Ambassador briefed the educational edifice, completed  with the support of French institutions, namely Île-de-France, Fondation Saint-Irénée, Fondation Raoul Follereau and the Fondation Mérieux as Hammurabi Organization undertook the implementation of the project by the contractor engineer Ashur Hadi followed -up by Mr. Louis Marqous Ayoub, Vice President of Hammurabi Organization and , Mr. John Yousef, head of the organization's branch in Erbil .

The completed project included a building of two-story school with twelve classes and administration and teacher rooms, a storehouse, library, health services and a yard. The school furnished with furniture and electronic supplies. This achievement came after completely destruction of the school by ISIS during invasion of Nineveh Plain in 2014, the school was ready and received its students during the 2020-2021 academic year.

The Ambassador highly valued achievement of Hammurabi Organization expressing thanks, appreciation and gratitude reiterating his astonishment at the magnificence of this exemplary achievement, describing it as a unique masterpiece as a result of all voluntary efforts made and at an incredible total cost away from any exploitation of the allocated funds,

Answering to His Excellency, Mrs. Warda emphasized Hammurabi's approach to replacing the honest conscience in place of exploitation as a fundamental solution to achieving the right to place the interests of the victims above all considerations. This is how the organization arrived, smoothly, realistically, happily, and on time, to the completion of this very important government edifice, which carries many symbols to the people of Qaraqosh in particular because it is the first school opened in 1919, and rebuilt for the third time.

The French Ambassador proposed to the management of the school, to demand that it be mixed to include female students, saying, "We support development, not backwardness." Because girls are entitled to this luck equally with boys, especially in this town where gatherings are not determined according to gender, but in everything there is mixing in the church and club ... etc. "With this goal, he emphasized this proposal by making the school mixed!

On behalf of Hammurabi Human Rights Organization, Mrs. Warda thanked the ambassador for the concerns of the French people as well as the French state to help Iraq in relief and reconstruction. Since 2014, France has witnessed an effective presence at the diplomatic and governmental levels as well as civil society, in particular in the regions affected by the violence invasion of the "Islamic State".

The French Ambassador visited the Virgin Mary Immaculate Church in Qaraqosh, in the process of internally and externally restoration in which had been completely deformed by ISIS, currently still for the upcoming visit of His Holiness Pope Francis in March. His Excellency listened with great interest to the explanation of Bishop Moshe, who received him in the aforementioned church and from there he was also farewell.

It is to be mentioned that the preparations for the official opening of the school were prepared by our organization, but unfortunately, due to the conditions of the Coronavirus pandemic, the arrival of Hammurabi Organization partners from France was unable, so the event was postponed until further notice.