In a workshop for the National Security Advisory on the subject of protecting religious and ethnic diversity in Iraq. 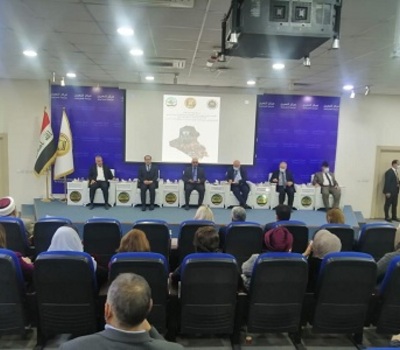 Mr. William Warda public relations official at Hammurabi Human Rights Organization, affirmed that the care of the National Security Advisory for the protection of minorities in Iraq is a symptom in preserving the Iraqi nationals and protect from the phenomena of fragmentation and division which is the opposite of diversity and an important point to be considered for the Advisory. However the workshop will be held on December 31, that is, the last day of 2020, this is not a time that matches the requirements of holding the workshop because the Iraqi Christians are busy with festivals they are minorities the subject of the workshop, and it was possible to choose another date.

Special Representative of the Secretary-General for Iraq, and Sayyid Ammar al-Hakim leader of the Wisdom movement, and many activists in the field of minority rights.

Mr, William Warda in his interference said: it requires the adoption of standards that ensure the achievement of protecting minorities through two basic conditions The first is the existence of safeguarding legislation and the second is the existence of positive applied policies to ensure implementation, or talking about protection will become a mere media and political consumption.

We ask now what has been taken so far to confront Article 26 the 2nd of the Unified National Card Law, that violates the rights of non-Muslim Iraqis, and where are the laws and regulations that guarantee the field implementation of minority rights, and what decisive measures have been taken by successive governments that put an end to abuse of the property and identities of minorities.

What is related to government policies in implementing the standards contained in international laws and instruments, the imbalance is prominent. There are eight international agreements and commitments ratified by Iraq out of nine agreements. If we subject this Iraqi ratification to reality, we find that there are many violations of its obligations, so the fundamental issue is to protect minorities. It is only related to implementation, and the way is clear to that measures of this kind will protect the rights of minorities and prevent violations of all that include abuses, containment, marginalization, absence or violence

Then where are the policies that guarantee the effective participation of minorities in making sovereign decisions,and where is the realistic and fair representation of Iraqi minorities in governmental institutions that deal with minority rights. Therefore, talk about protecting diversity must be accompanied by positive actions and practices that give positive indications of the existence of a real will for those in charge of the state to protect diversity and their eagerness to enhance community cohesion and civil peace.