Mr. William Warda participate in a training workshop on the Universal Periodic Review ( UPR) of human rights in Iraq 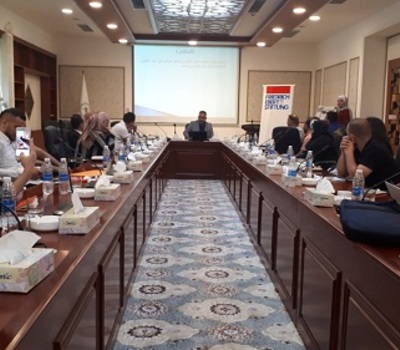 Mr. William Warda from the Alliance of Iraqi Minorities Network (AIM), Public Relations Officer at Hammurabi Human Rights Organization participated in the training workshop held by the Friedrich Ebert Foundation (FES) in Baghdad for two days starting on Thursday 8/8/2019, in order to prepare the capabilities of Civil society organizations on how to contribute effectively during the pre-session on the Universal Periodic Review (UPR) of human rights in Iraq, expected to be held next November at the United Nations Human Rights Council, and in accordance with the recommendations made on the periodic and comprehensive review in 2014, and what Iraq is required to do accordingly.

The first recommendation related to religious freedom In Iraq, in particular, the position of Article 26 the second of the Law No. 3 of 2016 (the law of the Unified National Card), which provides for the Islamization of non-Muslim underage children if one of the parents becomes Muslim, which constitutes a flagrant violation of the rights of non-Muslim Iraqi components. In addition, the Law No. 105, which prohibits the Baha'i activity in Iraq, Mr. Warda wondered why there is no insistence on not amending Article 26 the second of the law of the Unified National Card or not to cancel it permanently, especially since Hammurabi Human Rights Organization put forward a proposal for amendment that outcome of several conferences. The proposal was welcomed by non-Muslim groups and of moderate Muslims, is that children who are underage to remain on their original religion until the age of 18, leaving them with the option to either remain on their religion or convert to Islam.

In the same context, Mr. Warda asked why there is no repeal of Law No. 105, which prohibits Baha'i activity, enacted by the former regime, especially since the Baha'i faith was recognized in Iraq until 1970, although most of the laws and decisions of the former regime were repealed after 2003.

The second recommendation that Mr. Warda called for is the recognition of genocide and crimes against humanity on minorities, the non-impunity of criminals who have committed such crimes or who have committed murders, rape, captivity, change the religious affiliations of the Yazidis, Christians, Shiites, Turkmen, Shabaks and others; asking why does the Iraqi state hesitate to recognize this genocide, especially it has sufficient evidence of this from the mass graves and the confessions of the victims and the issues that are visible to prove the achievement of the elements of these crimes on the perpetrators, noting that Iraq has not yet recognized the genocide, although the United Nations has acknowledged the occurrence.

Mr. William Warda called on the third recommendation to amend the curricula, to meet the protection of social, religious, ethnic and cultural diversity as a civilization image necessary for Iraq since ancient times, and that its violation in favor of certain components represents a flagrant violation of human rights, stressing that the federal government and the Kurdistan Regional Government of Iraq and as a result of the proposals of the Alliance of Iraqi Minorities Network to make some adjustments, but the amendments were not in the curriculum and basic books on which the student depends in its curriculum, but in some secondary books, which did not reflect positively on the required reality that adequately protects diversity, reflects the definition of the reality of Iraqi society and its diverse culture .

Mr. Warda propose to develop a national plan to modify the curriculum to meet the respect for diversity, human rights and the rights of minorities, wondering what's wrong in the development of curriculum for students studying religions in Iraq, and not only a specific religion because the present and future of Iraq lies in the protection of this diversity.