Mrs. Pascale Warda and Mr. William Warda made a free field tour to Batnaya and informed the extent of the destruction caused by ISIS in the town 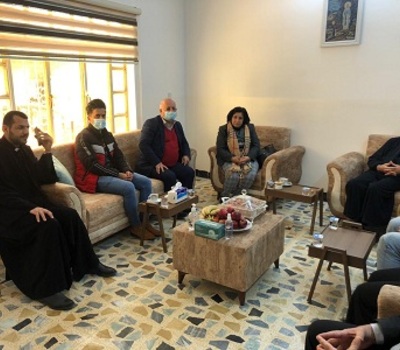 Once again, Mrs. Pascale Warda, Chairwoman of Hammurabi Human Rights Organization, and Mr. William Warda, the public relations official of the organization, visited on December 27, 2020. the town of Batnaya within the district of Alqosh, Nineveh province, within the organization approach for free field visits to all areas affected by ISIS crimes, including all the areas of Nineveh that were the scene of ISIS terrorism.

The delegation met Father Aram, pastor of the Chaldean Church in the town, discussing the challenges facing Batnaya in the extent of the destruction that is still suffering from, as this destruction reached 80% of the number of citizens homes in addition to destruction of the church and service facilities, a reason preventing the return of the majority of town residents.

For their part, Mrs. Pascale Warda and Mr. William Warda praised the great faith efforts made by the priests, including Father Aram, to strengthen the morale and urge the other displaced to return, similar to what the current returnees are doing.

It was also a valuable opportunity for the delegation of the Organization to meet pastor Salem Saka, president of the Supreme ecclesiastical court of Chaldean Church in Iraq, where they exchanged talks on many Iraqi Christian affairs and the importance of having a strong and firm will to uphold the homeland and employ the spiritual will for the sake of restraint that preserves the Christian identity as place, heritage and faith.  Aram and pastor Saka welcomed  Mrs. Pascale and Mr. William Warda.

Within the visit the delegation met some of the returning families expressing appreciation for their courage in defying the difficulties facing them in their stricken town. Hammurabi Organization affirmed to make more efforts to support the returnees, and it has been doing so since the early hours to liberate Nineveh areas from terrorism.