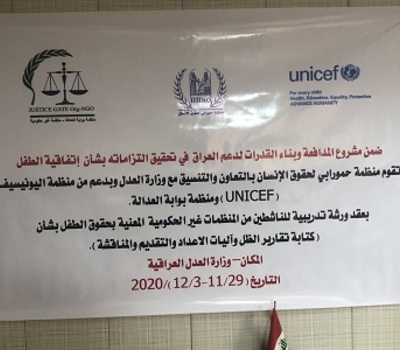 The fourth workshop of Hammurabi Human Rights Organization held on November 29, 2020 ,three of which allocated to government officials from the Ministry of Justice and other ministries , council of Ministers, the Supreme Judicial Council and National Security to be qualified in writing reports in light of the Convention on the Rights of the Child

The workshop held by Hammurabi Human Rights Organization and sponsored by the United Nations Children's Fund UNICEF, in cooperation with Bawabet Al-Adala Organization hosted by the Ministry of Justice like the three workshops within the framework of Advocatory and capacity building project held to fulfill obligations related to the rights of the child.

Mr. William Warda, the public relations official at Hammurabi Human Rights Organization, project manager, opened the workshop, giving a presentation of the project and indicating the importance of the fourth workshop on writing shadow reports, preparation, evaluation and discussion mechanisms to integrate Iraq's efforts to fulfill human rights obligations towards children according to application for the Convention on the Rights of the Child.

Mr. Warda expressed his sincere appreciation and thanks to the Ministry of Justice for hosting the four workshops.

Within the workshop schedule, Mrs. Pascale Warda, Chairwoman of Hammurabi Human Rights Organization, addressed the general principles of human rights shedding light on some main points and the role of NGO's to evaluate governmental human rights work in light of the considerations to which the government is committed.

The second lecture was presented by, Dr. Mohammad Turki al-Obaidi, Director of the Human Rights Department at the Ministry of Justice, addressing an important aspect of his speech to the bodies and the contractual agreement for the protection of human rights, noting the importance of corresponding vision between government reports and shadow reports in a way that safeguards rights reflecting objective professionalism within the standards of the state compiled with human rights standards or vice versa, here lies the necessities of evaluation and correction, and Dr. Al-Obaidi used a documentary film about the United Nations human rights system and how it works in monitoring reviewing and establishing opportunities for states parties to correct their human rights paths enhancing skills and maintain the guiding approach in writing reports. It also reviewed the basic principles underlying the Convention on the Rights of the Child is based.

In response to this, Mr. Warda was keen to conduct the sessions with more clarifications to enhance the knowledge given during the lectures, indicating that all this aims to promote human rights in Iraq, explaining the issues of acceptance and reservation toward rights.