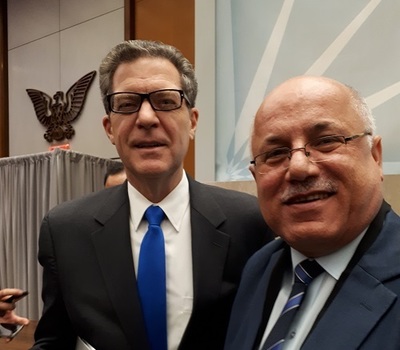 Mr. William Warda, Director of Public Relations of Hammurabi Human Rights Organization participated in the First Ministerial Conference to Advance Religious Freedom hosted by the U.S. State Department and at the invitation of the Secretary of State Mr. Mike Pompeo over the past week (24-26) July 2018 in Washington.

During his participation Mr. Warda met Mr. Sam Brownback the United States Ambassador-at-Large for International Religious Freedom at the U.S. Department of State , as part of the event held by the United States Holocaust Memorial Museum on the sidelines of the Ministerial Conference sponsored by the US government.

Mr. Warda clarified, when demanding compensation for Christians, Yazidis , Baptist Mandaeans and others, this does not necessarily mean only material compensation, but moral compensation and achieving positive discrimination in terms of increasing their participation in State institutions and appointments, also in state decisions as equal citizens in terms of rights and duties.

He pointed out that Hammurabi Human Rights Organization is working side by side with state institutions, especially the Follow-up and Implementation Committee for National Reconciliation, to address gaps and problems and work to support reform in minority areas and raise abuses. He called for supporting all efforts to enable the state to achieve security and stability for what is good for all Iraqis without discrimination.

Mr. Warda also met Mr.Knox Thames Special Advisor for Religious Minorities at the US State Department expressing his thanks for his efforts to hold such a conference and the invitation to Hammurabi Human Rights Organization to participate. He also discussed the importance of coordination and cooperation to promote religious freedom in Iraq and to build peace and stability. . 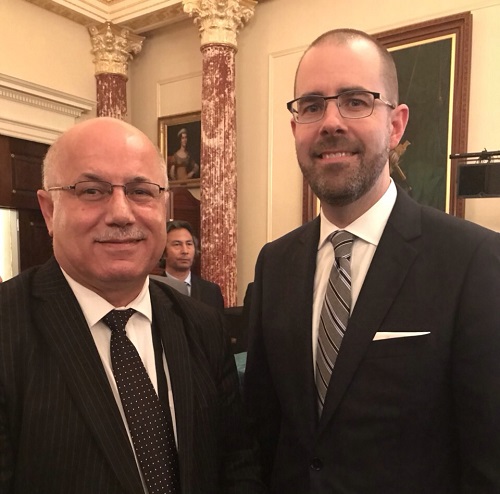