The new board of directors of Hammurabi Human Rights Organization renews its high confidence in Mrs. Pascale Warda and re-elects her as Chairwoman of the organization 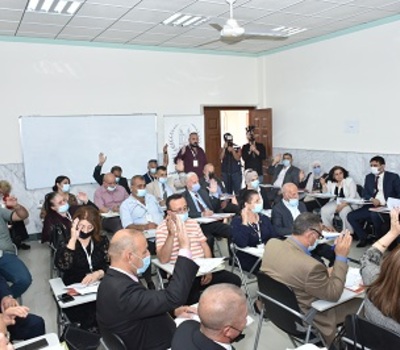 The new board of directors of Hammurabi Human Rights Organization held a meeting in Baghdida, Al-Hamdaniya district, Nineveh Governorate, on 29th of May 2021, a few hours after the conclusion of the sixth periodic conference of the organization held in Baghdida.

The agenda of the organization displayed works of the previous stage including activities in human rights and relief fields implemented programs since the conclusion of the work of its fifth conference held in April 2017.

The participants discussed the achievements of the organization to serve issues of civil rights and to confront corruption and quota tendencies. The participants also discussed the high evaluative position of the organization including letters of praise and appreciation in honor of the distinguished efforts, and the wide national and international interest in achievements of service activities to all Iraqi components focusing on the rights of minorities, women and children, besides lifting grievances.

The meeting was devoted to electing chairperson and vice-chairperson, distributing tasks among members. The board of directors renewed its high confidence to the chairwoman of the organization Mrs. Pascale Warda and the vice president Mr. Louis Marqous Ayoub, to Mr. William Warda in charge of public relations and media and financial tasks and entrusted to Mr. Mohammed Kadhim  AL-Maeni  in charge of research and studies and Dr. Saif Adnan in charge of human rights monitoring tasks.

After completing procedures, Mrs. Warda responded referring to the need for a substantive development on the mechanisms of the organization's work to meet the confidence of the participants in the sixth periodic conference with the new council and achievements made by the organization in the previous stage, and the importance of the next stage to be more profound in administrative, organizational and field effort.