The project supported by Christian Solidarity International include neighborhoods, towns, schools, orphanages and camps in Dohuk, Nineveh and Baghdad 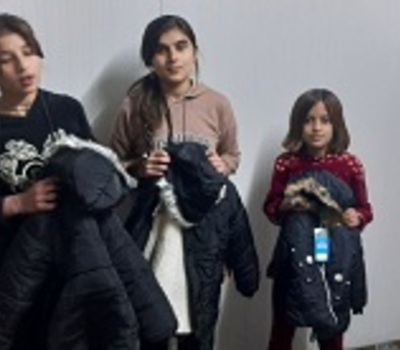 Hammurabi Human Rights Organization HHRO supported by Christian Solidarity International CSI completed implementing project of distributing winter clothing.  The process came in two stages, the first in Ninevh Plain including the towns of Bartella, Batnaya, Telkef, Alqosh, Talskof, Jambour, Khanki, Karamles and the towns of Daoudia and Khank. As for the second stage included the areas of Camp Sarah in Baghdad, and the villages surrounding Mar matti Monastery in Nineveh Plain, which are Mirki, Maghara, Al-Faf and Baraka also included orphaned children in the displaced camps in Daoudia and Khank in Dohuk.

The number of orphaned children and students was cared for the winter clothing has reached 712 boys and girls and due to the low temperatures and the need for cold protective clothing the distribution process relied on a mechanism of precision and speed, besides more than 200 children under five years of age, for whom gifts were distributed, including various toys, diapers, etc.

The two Churches of Mar Yousuf and the Assumption of the Virgin in Al-Mansour also contributed to this event.

Participants in the project management were Mrs. Pascale Warda Chairwoman of the organization, Mr. Louis Marqos Ayoub, vice president of the organization, and William Warda, member of the board of directors and general coordinator of the project, the management of the project was entrusted to Mr. Farhan Yousuf member of the administrative board , number of members of the organization's general board participated in the distribution, Mr. Amir Saed Mal Allah, Khalil Oraha, Warda Al-Awrshi, George Issa Yaqoub, Hassan Hanna, Bassam Chito.As well an initiative was taken by number of volunteers in field distribution process in Karamles, including Fadi Daoud, Raad Saad Marzina, Fener Bassem Benoka, Behnam Waad Qaryaqos.

Table No. (1) shows the distributions of winter clothes for orphaned and poor children, regions, numbers and dates of distribution in the first stage

Table No. (2) shows the distributions of winter clothes for orphaned and poor children, regions, numbers and dates of distribution in the second stage